Changes:
– Updated the videos in the Help tab of the menu.

Bugfixes:
– Increased visibility of text labels, such as DX Spotting callsigns.
– Fixed issues with mixed mode map update timing.
– Fixed issues with night mode not updating correctly.
– 24-hour clock now displays 00:00 correctly instead of as 24:00.
– Temporarily disable IPv6 to help with networking issues some customers are seeing.
– Timeband now initializes as 24-hour correctly if that option is selected.
– Improved stability of the platform upgrade, and set up a way to recover some devices that failed the update.
– Reduced bandwidth and improved stability of sleep mode when ISS Live Earth View is enabled.

Changes:
– Extensive modifications to the underlying rendering system to allow for more complicated layers in the future.
– Atlas 2 only: Addition of an ISS Picture-in-Picture video feed in the Premium tab. More info here: (link)
– Addition of a Set Home Location system which improves the Night Mode subsystem, as well as being useful for the upcoming Center Projection feature.
– Addition of an option to toggle slimmer timebands.
– Moved legends to fully reach to the edges of the screen, freeing up more map space.
– Numerous small improvements and optimizations.

Bugfixes:
– Fixed a bug that could cause Atlas 1 devices to periodically lose the terminator if too many layers were enabled simultaneously.

Changes:
– Sleep mode now reduces bandwidth usage drastically by slowing down layer updates.
– The “Custom Callsign” layer from the Ham Radio Bundle now includes a “Ø” character.
– You can find Ø in the Custom Callsign On-Screen Keyboard next to 0. If you already used 0 in your callsign, you’ll need to manually change your callsign to use Ø instead if desired.

Changes:
– Added an “Auto-Maintenance” feature that allows the unit to perform a maintenance cycle at 2am local time.
– This includes automatically installing new updates, and allows for routine memory management.
– If your Geochron is laggy or periodically losing display elements, enabling this “Auto-Maintenance Mode” will increase performance.
– Added help buttons to “Unlimited Layer Downloads” and “Auto-Maintenance” in the System tab to help explain their function.

Changes:
– Added a “Manual Time” system on the System tab to allow time to be set manually.
– This is an advanced feature that is only intended for use in situations where an internet connection is impossible, as it disables NTP and no longer uses our server to increase time accuracy.
– Added an “Internet Connected” image to the top left of the screen, which vanishes if internet is disconnected.
– This can be disabled from the Internet tab.

Changes:
– In the System tab, a few updates ago we added an on /off switch for “Unlimited Layer Downloads” to improve performance when multiple layers are used.  Turning OFF “Unlimited Layer Downloads” will only download layers that are currently being used.  This improves the device performance, but there may be a delay when new layers are added.

Changes:
– Added Premium tab to the menu.
– Includes PIN system for device activation.
– Added the Earthquake Layer as our first Premium layer.
– Has a five day free trial that can be enabled from the Premium tab of the menu.
– Can be purchased through our website after activating your device using the PIN displayed on the Premium tab.
– Numerous systems to support adding and removing premium layers.
– Added trial system that allows the device to request a free trial of a premium layer.
– Several new systems and bugfixes to support the upcoming Ham Radio Bundle.

– Improved overall consistency of Internet tab, especially when reporting if connected to Wi-Fi.

– Support for the new Atlas 2 to allow all platforms to share software.

– Added layer exclusivity system, to keep layers with too much content from being simultaneously enabled. This keeps the Geochron from getting overwhelmed.

– Fixed bug requiring a restart after connecting Ethernet for it to function.

– Keyboard no longer inconsistent when switching to Shift layout.

Universal Changes
Some layer changes were released at this time for all customers that are updated to at least 2.1.1.20.

– Precipitation color changed to green and amber to fall more in line with NOAA style guidelines.

– Australia category added to Live Commercial Flights layer.
– Please note that you may need to reload the program before Rotate
Categories includes this new category

– Show Future option modified to eliminate a bug that would reload the Geochron into a state without the terminator line.

– Stability improvements to reduce issues with eventual slowdowns and rare crashes based on API cache.

Changes
– Added aviation layer that displays a sampling of currently flying airplanes across the world.

– Improved error handling in the menu in case of crashes.

Changes
– Overhauled update system to reduce the rate of update failures, as well as simplify recovery.

– Menu styling improvements for display resolutions less than 1080p, such as 720p.

– Resolved bug with API cache that could result in storage issues.

This is the version of software that V2 devices that undergo the recent menu update process will be placed at after the update concludes successfully. For these devices, changes from all previous “Atlas only” updates are included.

Fixed bugs:
– Improved menu styling for lower resolutions to fix an issue with not being able to access the full Live tab.

Changes:
– Back end API module loaded for future expansion.  Layer generation will be much easier in the next version for programmers.

Changes:
– Using the dropdown box in any and multiple categories, you will see “Show” and “Hide” on each satellite listed.  You can select as many satellites as you like, without viewing entire categories.

– The “Hide All”  button adjacent to “See All Groups” at the top of all categories will remove all selected satellites from the display.

– Improvements in page scrolling navigation for the Pins, Satellites, and Time tabs.

Changes:
– Number of custom pins in-use is now displayed, alongside the maximum count of 50
– Pins are now in a scrolling list, so if you add more than fit on the screen, you can still navigate to them!
– Set-up new software testing system to limit interruptions to normal updates.
– Miscellaneous stability improvements

Fixed bugs:
– Full Factory Reset could sometimes prevent updates in the future.
– Sometimes software would update, but the version number would not.
– Updated ‘factory software’ reset bundles to prevent related issues from reoccurring.

Changes:
– Reset to Factory Defaults button is now labelled Full Factory Reset, which will reset the Atlas to factory-installed software versions.
– Addition of Reset to Default Settings button in System tab, which will only delete user settings and Wi-Fi networks.

Fixed bugs:
– The Day of Week indicator along the bottom of the map and Time Strip at the top of the screen could become misaligned from the map when custom pins were moved.
– Position of pins, satellites, and satellite paths was sometimes inaccurate at high or low latitudes.
– Fixed crash upon manual entry of a large number into pin latitude/longitude field.
– Check for Update button in Power Menu did not apply updates, if found.

New features
– Added refresh button for all weather layers, at menu/live/weather. This will manually correct cache issues, where some weather squares are not appearing.

– Clouds now appear BELOW precipitation live layers because where there is rain, clouds are assumed.

New features
– Predictive satellite tracking, as shown as a dashed line in the future for all displayed satellites.  Duration of predicted path is equal to the historical path setting, up to ten minutes nominally, and 100 minutes for the ISS and HST satellites.

– Screen sleep function: From the power button on the remote, the menu will also display a ‘sleep mode’.  Pressing this button will turn off the video display, but not the computer itself.  Press any remote button to restore the video feed.  Geochron’s remote will not operate your TV.

Bug fix:
– Analemma is now tracking correctly and consistently on the map when enabled. 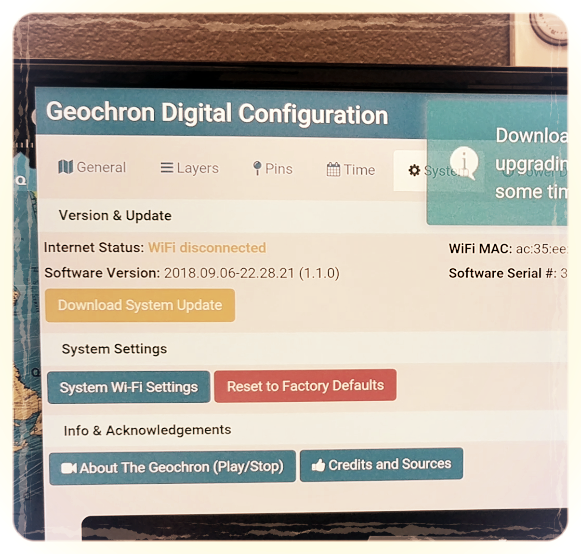 Please note: This software update is large (~250MB) and will need security permission to install and an additional menu or two.

Update:
– Frequently requested, the International Space Station now has an on/off trailing vector, and a pixel-sized dot for its actual location.

Patch:
– Some GD4k’s were rebooting way too often.  Fixed.

Deeper dive:
1. On a recent update, we added a feature that would reboot the program if any error was detected.  This feature was overly enthusiastic, and was rebooting some computers over tiny, insignificant errors.
2. This major update also includes some background operations that will help us add more Live Layers like weather, and Ham Radio propagation in the future.

1. Topographical map display was intermittent in Mixed Mode – Fixed.
2. Mystery multi color vertical line at the midnight point – Fixed.
3. Odd placement of the Day of the Week indicator in some units – Fixed.
4. Hour Band at the top of clock was offset by a few minutes – Fixed.

Deeper dive: We reduced the overall size and processing needs of the Geochron Digital to a tiled video output to make room for additional upcoming features.  This caused some alignment issues.